Set within a few minutes from Makati's Central Business District, the Linear is along Mayapis Street, in front of the Cash and Carry mall in San Antonio Village. Residents have greater access to other premium establishments—such as hospitals, academic institutions, major shopping malls and recreation hubs. It's also accessible from major transportation thoroughfares such as the South Luzon Expressway and the Sen. Gil Puyat avenue (Buendia).

Vinia Residences provides the opportunity to live in a location that is easily accessible via roads and MRT making it easy to access various parts of Philippines. It is strategically located near North Avenue MRT station, that is two minutes walk away and that links it to the rest of the metro area while LRT 1 Roosevelt Station and LRT 2 Cubao Station are 1.3 km and 4.6 km away respectively.

Residents can also connect to various parts of the city using roads such as West Avenue, Quezon Avenue, North Avenue, and Commonwealth Avenue. They can use buses, private vehicles and cabs to move up and about the city.

It is also close to many amenities including academic institutions, shopping centers, recreational hubs, and hospitals.

The area where Vinia Residences is located is endowed with many hospitals with residents can access for various health matters. The closest one is Veterans Memorial Hospital, which is a few meters away. Others include St. Lukes Medical Centre, Medical City, Our Lady of Fatima Hospital, Lung Centre of the Philippines, Philippine Heart Centre, De Los Santos Hospital, Cardinal Santos Medical Center, UERMMMC, Humana by MEDICard, Westmed Diagnostic Clinic, Intermed Healthcare, and NSPI Dialysis center.

With the many shopping malls and entertainment centers nearby, residents at Vinia Residences will find it easy to meet their various grocery and entertainment needs. The closest is Trinoma, which is just five minutes walk away. Other shopping malls that are not far off include TLJ Trinoma, SM City North EDSA, SM Megamall, Robinsons Magnolia, Robinsons Place, Ali Mall, Greenhills Shopping and Entertainment Center, The Araneta Coliseum, Sm City Cubao, Walter Mart North EDSA, The Gateway , Shangri La Plaza, West Life, Caltex and Humman Essence Spa.

There is no shortage of wining and dining places near the development. On the ground floor of the premises, there is a coffee shop while most shopping malls have food and beverage outlets where residents can enjoy their meals. In Trinoma Mall, there is TGI Fridays, Italianni’s Restaurant, Cyma Greek Taverna, Wingstop TriNoma Mall and Quiznos.

Residents can use the jogging paths at Vinia Residences for outdoor fitness activities. Also nearby there is the veterans golf course for those who prefer more activities outdoors.

For those who are religious, the area near Vinia Residences has various places of worship that include Church of the Gesu, Iglesia ni Cristo and Parish of the Holy Sacrifice. 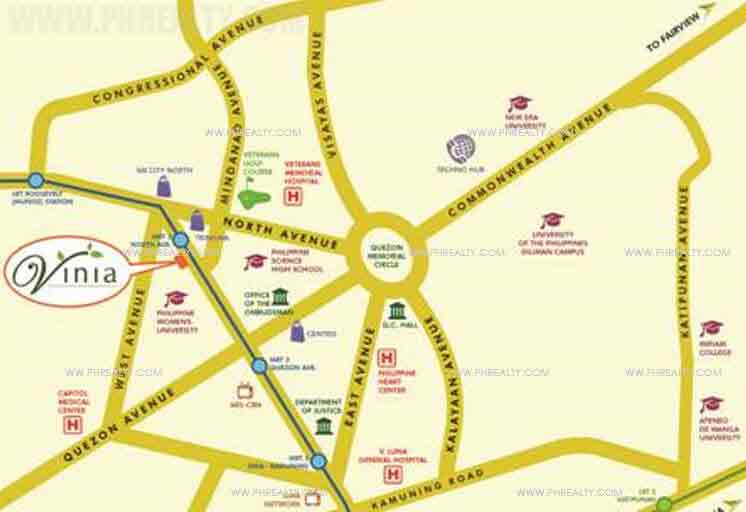